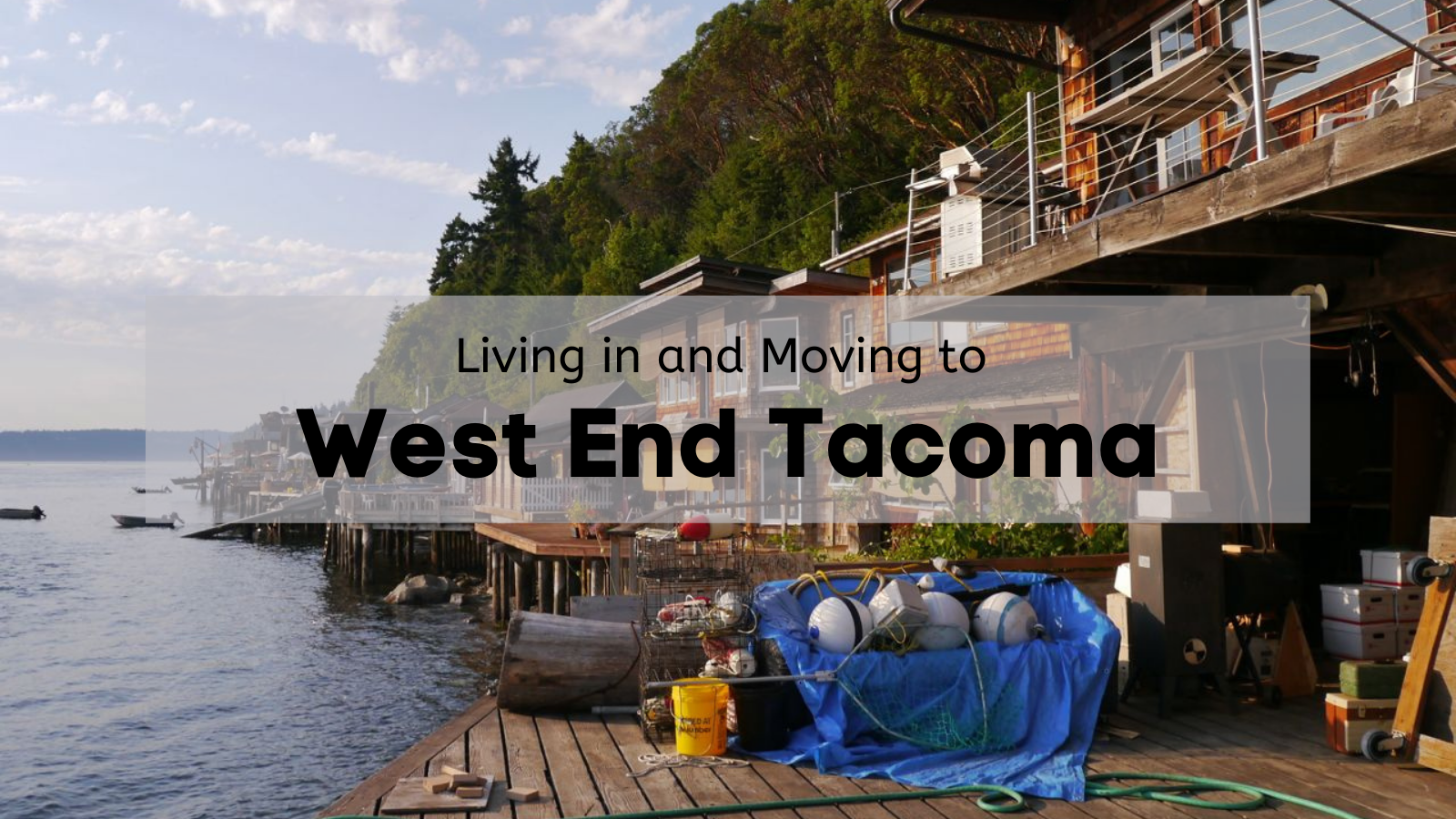 If moving to Tacoma is on the horizon and you’re looking for the perfect neighborhood to make your new home, look no further than West End. For comfortable, picturesque living that’s close-enough-but-far-enough-away from the action, you can’t do much better.

With not one, not two, but three of the county’s best parks, mouth-watering casual and fine dining restaurants, trendy bars and enlightening museums, there are countless reasons why life in Tacoma’s exciting West End could be the one for you.

Let’s take a deep dive and find out why it’s consistently ranked as one of the best neighborhoods Tacoma has to offer!

The history of modern-day West End begins in the mid 1800s. After the Indian War, a small abandoned settlement was brought back to life by postmaster and Civil War veteran Job Carr, with developer Morton M. McCarver naming the project Tacoma City, after the natives’ name for the neighboring mountain.

By 1873, things were expanding, and the neighboring New Tacoma was selected by the Northern Pacific Railroad to be their western terminus. Two years later Tacoma City was incorporated, and by 1884, the two communities had grown so much they were merged into one. The result was one of the most booming cities in the whole country, with the population growing from 1,098 to 36,006 in the decade between 1880 and 1890.

The early 20th century saw Tacoma take brief stints as a major destination for automobile racing and film production, until around the time of the Great Depression taking hold. This would eventually lead to a sizable decline in Downtown Tacoma throughout the mid-20th century, before steps were finally taken to revitalize the area in the 1990s.

Getting Around in West End Tacoma

Getting around in West End is no trouble at all; while West End was built with the automobile in mind like most cities, the area is still well served by public transportation.

Piece Transit covers all of Tacoma with their myriad bus routes, connecting West End to Gig Harbor, Tillicum, Spanway, South Hill, Puyallup, Edgeway and Auburn. Commuter and light rail is also available, although Tacoma Rail from Morton to Port of Tacoma passes it by in favor of BNSF and UP serving the area. Ferries are also available between Port Defiance and Tahlequah.

Finding simple and quick access to Downtown Tacoma and all the adjacent neighborhoods won’t be an issue, as you can see. If you’re the kind of person who’d prefer to get around on foot though, you’ll still find plenty of great museums, restaurants and lively nightlife spots all within walking distance.

West End is in a great proximity to the Seattle-Tacoma International Airport too, just a 30-minute (22 mile) drive away, or an hour and 30 minutes on the bus.

With a population of more than 42,300 people, West End offers a mix of urban and suburban living, populated predominantly by young professionals and retirees.

Several smaller communities make up Tacoma’s West End, including all or part of Highlands, The Narrows, Narrowmoor in the West Slope, Salmon Beach, Titlow Park, and Westgate. Salmon Beach is an especially exclusive neighborhood, with only residents and their guests allowed to enjoy the Tacoma Narrows shoreline.

After moving to West End, Tacoma, you’re only ever around 12 minutes away from Downtown Tacoma. Anyone commuting to work or looking to take advantage of the Downtown nightlife will definitely enjoy the benefits, and not have to worry about any lengthy rides home after a late night out!

Where to Eat, Shop and Have Fun in West End Tacoma

Finding whatever you need to keep you busy in West End will be no trouble at all, whether you’re looking for fashionable bars, family friendly restaurants, or an adventurous day out.

There’s no end to the activities you can find going on in and around Tacoma’s West End. Whether it’s sports like swimming, golf, martial arts, running, outdoor fitness classes, seasonal events such as snowshoe hiking, nature activities, and scuba diving, or before and after school camps, cooking classes, art classes, or even festivals and other music events.

Many of these can be found at Titlow Park & Lodge, West End’s premier destination for outdoor activities. And if one great park isn’t enough, there’s also Point Defiance Park, home to gardens, trails, the Point Defiance Marina, and the Dune Peninsula. It’s also home to Owen Beach, and all of its beautiful walks and views. You’ll also find the Point Defiance Zoo and Aquarium here. Come meet animals and sea life from all over the world, with everything from tigers, elephants, leopards and gibbons, to sharks, stingrays, sea urchins, and all the tropical fish you could dream of.

Those looking to take in some learning or discover the rich cultural history of the area will definitely love the Fort Nisqually Living History Museum. Originally a Hudson’s Bay Company farming and fur trading post, today it’s a perfect place to learn about and experience life in mid-1800s Washington.

When it comes time to eat, you’ll be glad to know West End has a whole host of contenders. Fans of Mexican food, seafood, Thai… you name it! Even if you just want a simple, tried and true sandwich, West End Tacoma has your back.

Finally, any fans of craft beer will be spoiled for choice with all the local bars and breweries, including 7 Seas, Odd Otter, Black Fleet Brewing, Pacific Brewing & Malting Co., and Dystopian State Brewing Co., to name just a few. If sports bars are your thing, look no further than the West End Pub.

Where to find these West End, Tacoma attractions and activities

Whether you’re looking to rent or buy after moving to West End, Tacoma, there’s definitely something for everyone. On the buying side, West End has a pretty competitive real estate market. The West End, Tacoma median house price sits at $650,000 (with prices up 30% since 2020), while by comparison, Tacoma’s median home price in general is $460,000. To get the perfect idea of what kind of West End Tacoma home you can get for your money, why not check out the following list of West End, Tacoma homes for sale.

For renters, the median West End, Tacoma rent is $1,450 a month for a 1-bedroom apartment. This makes it the third most expensive Tacoma neighborhood, behind New Tacoma and Central.

You’ll tend to find a lot of older homes around Tacoma, although the West End being a bit newer mixes things up a bit and gives you some more options. You’ll still find all the older homes, but you’ll also find a lot of newer builds, housing developments, and condos to go along with the historic neighborhoods of old.

Here at All Ready Moving, we’re poised and ready to make moving to West End as easy and worry-free as possible. So as soon as you’re ready to get the ball rolling, get in touch with our West End Tacoma movers and let us put all of our expertise and experience to work.