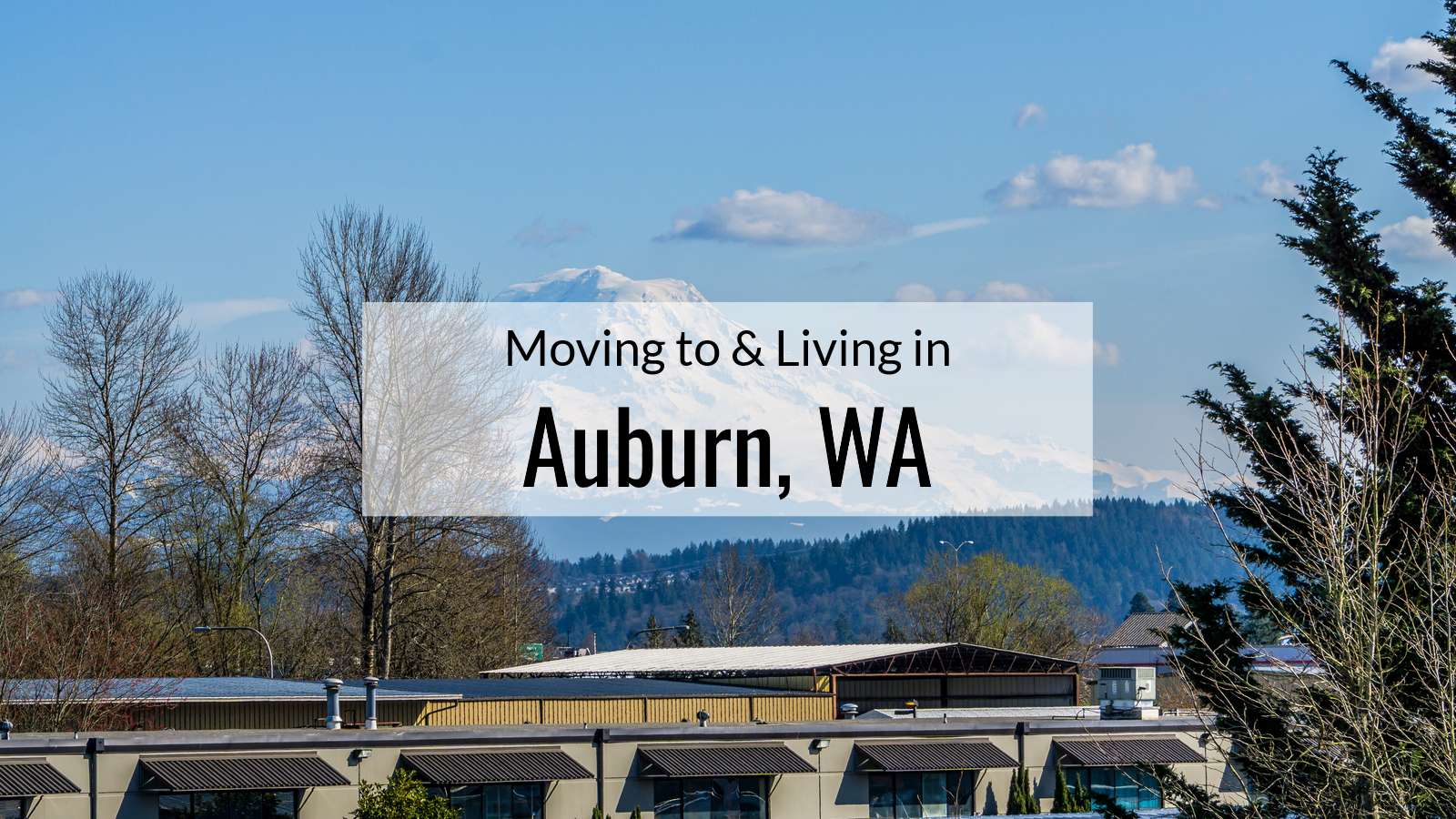 Living in Auburn WA 🏡 | Is Moving to Auburn Worth It?

Auburn, sometimes called “A-town” by the locals, is the beauty of King County, Washington. Located just north-east of Tacoma and south of Seattle, this city was founded way back in the 1850s, originally bearing the rather macabre name “Slaughter”, with the local hotel even being named the “Slaughter House”. Thankfully (or maybe sadly in some reader’s opinion), this name was quickly changed to Auburn, to honor a city of the same name in New York that was known for its production of hops, which Auburn is still known for today. Aside from its local natural beauty, Auburn is also known for its more famous residents, like Congressman Dave Reichert and NASA astronaut Francis Scobee.

Auburn is not New York, but it’s fairly densely populated. With a population of 82,021 distributed out over 30 miles at a population density of about 2,700 people per square mile. The median age here is 35.4, which is about ten percent lower than the Washington average of 37.9. The median household income in Auburn is $73,466, about 10% lower than the average income for the state of Washington.

Auburn is a fairly diverse place, with 57% of the population being Caucasian, and significant Hispanic and Japanese communities. Auburn’s population is 54% female.

51% of Auburn’s households are married couples, and there are 2.7 people per household on average here. Auburn is also well educated, although not quite as well educated as the Washington average, with 88% of its population having high school diplomas, and 30% having bachelor’s degrees.

Thinking about moving to Auburn, but worried about the crime rate? While Auburn does have a slight crime problem, getting a C+ rating on Areavibes, its crime rate is still 19% lower than the national average, with the violent crime rate being 7% lower and the property crime rate being 21% lower.

Cost of Living in Auburn, WA

For an urban center near the coast, Auburn is affordable, but will still put strain on your wallet., with the cost of living here being 15% higher on average than other places in America, according to Payscale. Homes here are more expensive than the usual in Washington, but not by a large amount, with housing costing you $401,300 on average. You can also expect to pay more than the national average for things like healthcare and transportation, although utilities are significantly cheaper. Renting here is expensive, but not overly so, with the average rent for an apartment being $1,549.

Moving to Auburn might be more pricey than most of Washington, but it’s well worth the price for the safety and wonderful sights and sounds of Auburn’s brilliant city.

If you’re planning on moving to Auburn, you’ll have access to a wide variety of excellent schools that’ll see your child through to success. Auburn is served primarily by the rather bluntly titled Auburn School District, which handles every kind of school, from elementary to high school. Many of Auburn’s elementary, middle, and high schools have excellent ratings on GreatSchools. With excellent places of learning like Lakeland Hills Elementary and Auburn Riverside High, your child’s education will be in good hands while you’re living in Auburn.

Like most of Washington, Auburn has a nice range of temperatures if you like colder climates, but experiences lots of rain. You can expect lows of 35 degrees Fahrenheit during the winter months, and highs of 77 degrees Fahrenheit during the summer months. Auburn experiences just more than the average amount of rainfall when compared with the rest of the United States, with 43 inches per year as compared to the national average of 38.1 inches. Auburn experiences much less snow, with only 5 inches as compared to 28. The best times to visit Auburn, in terms of comfort rating, are July and August.

Auburn is a small city, but still has plenty of distinctive communities that are sure to please any kind of palette:

Most notable of Auburn’s neighborhoods is its Downtown, which is home to the vast majority of the city’s historic architecture. There’s also the primarily residential upper class neighborhood of Lea Hill, which ranks 67th in affluence compared to 522 areas in Washington. Christopher and Thomas are two former farming towns recently annexed, perfect for those who want a more rural community. 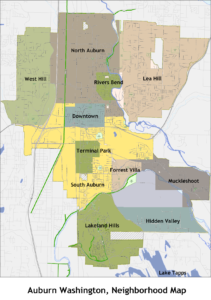 If you want to make yourself a part of any of these communities, you should check out the latest listings for homes for sale in Auburn, WA.

Those planning on making a living in Auburn should know that wages have been decreasing quarterly, but only by 1.3%, while the cost of living has been increasing, according to Payscale. The most popular employers in this community are Zones Incorporated and Multicare Health Systems. The most popular positions of employment are Certified Nurse Assistant, Registered Nurse, and Customer Service Representative. The average salary for a worker in Auburn is $66k a year, while the average hourly wage is $19.44.

Like many cities in the US, healthcare is the way to go if you want to make a living in Auburn. Check out the latest listings for jobs in Auburn, WA here.

Things to Do in Auburn, WA

Auburn may be small, but it’s chock full of fantastic opportunities for shopping and a variety of fun attractions! Check out local shopping centers like the Outlet Collection or Auburn North for a fun shopping spree! You should also check out some of the best things to do in Auburn, WA below:

Ready to win big? Then you’ve come to the right place! By far the largest casino in Auburn, this establishment on Muckleshoot lands fulfills all your daredevil needs.

Auburn’s natural beauty shines in this park, which is named after an ignited underground emission that still burns to this day. Most who come here come for the extensive kayaking, hiking, and a variety of other outdoor activities.

Places to Eat in Auburn, WA

Alongside its host of things to do, Auburn is also home to plenty of great eats! Check out some below:

Get the memo — Memo’s is the place to be if you want great Mexican food in Auburn! A wickedly popular joint with locations in other parts of Washington, this restaurant delivers the authentic taste of Central America straight to the Pacific Northwest!

The fact that this little place is located in the plaza of an airport hasn’t stopped it from becoming a favorite of Auburn locals. Serving authentic Japanese buffet, this restaurant is sure to please!

Ready to take that last step and start your journey to making Auburn your new home? Give All Ready Moving a call! Our crew of highly-trained professional movers will ensure your move is a stress-free process at affordable rates! Call now or fill out our online form for a free quote!