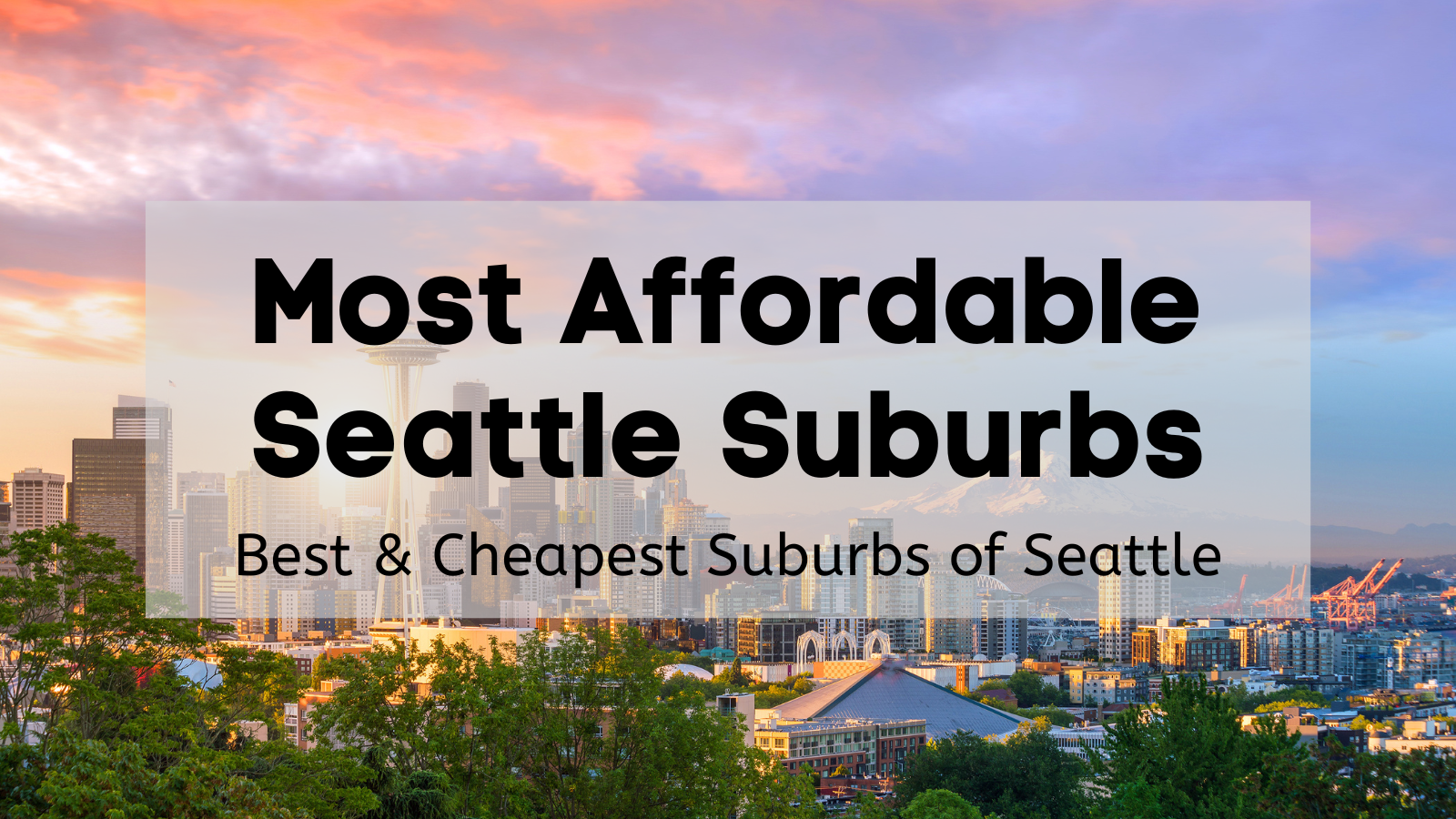 Moving is stressful, and trying to find the perfect suburb for you and your family with great schools can feel almost impossible–but we promise it’s not. Seattle is known for being expensive, and the cost of living is 67.8% higher than the national average. The cost to buy a house is 191.9% higher than the national average, so if you’ve always wanted to purchase a home, it can feel overwhelming.

Don’t worry, though, because there’s good news. When you choose a Seattle suburb, it can give you more space, it has lower crime than the heart of the city, better schools, and you get more bang for your buck.

For those who don’t know, a neighborhood often only has residential homes, whereas a suburb is a mixture of homes, commercial businesses, and buildings and is in a metro area. In this case, we’re sharing some of the most affordable suburbs of Seattle.

SeaTac is a suburb in Seattle and got incorporated in 1990. It’s part of the Seattle Metropolitan Area, and the suburb is a portmanteau of Tacoma and Seattle.

SeaTac has over 900 licensed businesses within the suburb, and 80 of those are Fortune 1,000 companies. SeaTac is one of the most affordable Seattle suburbs and is great for business owners. It’s home to Alaskan airlines and is thriving economically. If you’re looking for a vibrant and fun community to settle down in, SeaTac is the perfect place!

While the crime rate is on the higher side, there are still plenty of places that are safe to call home, just like in any suburb.

In addition to being a hub for businesses, SeaTac has plenty of family-friendly activities to try, like iFLY Indoor Skydiving, Highline SeaTac Botanical Garden, and Angle Lake Park.

And if you’re looking for a delicious restaurant to try out for your next date night or night out in the town, make sure to check out the 13 Coins SeaTac, Sharps RoastHouse, Floret- By Cafe Flora, or the Copperleaf Restaurant & Bar.

There are plenty of amenities and activities that are family and kid-friendly throughout SeaTac.

Clyde Hill is a great place for young professionals due to it being an affordable place to live, being close to the heart of Seattle, and also being a pleasant place to settle down and start a family.

While the price might seem high compared to other states and cities, Clyde Hill is an affordable suburb, especially compared to the surrounding areas in Seattle–what makes the cost of living go over the national average is the housing cost.

Plus, with the median household income being well over the state median income of $77,006, it helps to balance everything out– making Clyde Hill a cheaper place to live. Also, keep in mind that before the real estate jump, the prices for homes in this suburb were consistently in the low $2,000,000.

If you love trying new restaurants, then you’ll love Clyde Hill. There are so many amazing restaurants all throughout the suburb, like Maggiano’s Little Italy, Haidilao Hot Pot, Fern Thai On Main, STK Steakhouse, Cielo Cocina Mexicana, and Broiler Bay Hamburgers. And one of the top attractions for people of all ages to check out in Clyde Hill is Clyde Beach Park.

A post shared by Fern Thai on Main (@fernthaionmain)

Known for its Historic Maritime and Naval heritage, Bremerton is a small waterfront community that is a popular place for individuals and families in the military due to the Naval Base Kitsap Bremerton.

Some of the most popular places to visit in Bremerton are the Bremerton Boardwalk, Illahee State Park, USS Turner Joy, Puget Sound Navy Museum, Harborside Fountain Park, and Kiwanis Park.

With the accessibility to parks, schools, and family-friendly activities, Bremerton is a great place to raise a family.

The home prices in Bremerton are lower than most suburbs in the Seattle area, so it’s a cheaper place to settle down and get into real estate.

Similarly to Clyde Hill, Yarrow Point is still an affordable place to live, especially when compared to the surrounding area. The median household income provides the flexibility to be able to afford more expensive homes and rent.

Yarrow Point has great schools. One of them is the International School. The school is 6th-12th grade, and it’s nationally ranked #59, and has a total score of 99.67/100.

If you’re thinking about moving to Mercer Island, then you’re not alone. There are plenty of fun things to do throughout Mercer Island. Some of the most popular include: Luther Burbank Park, Mercerdale Park, Groveland Beach Park, Aubrey Davis Park, and Mercer Island Community & Event Center.

While the home price might be on the higher side, the overall cost of living is still affordable compared to other parts of Seattle— specifically looking at the rich areas like Denny-Blaine, Broadmoor, Laurelhurst, Madison Park, and Windermere.

Mountlake Terrace is a safe community and a great place to settle down. If you’re looking for a fun park to take your kids to in Mountlake Terrace, there are two popular ones: Ballinger Park and Terrace Creek Park.

The home price and the average rent in Mountain Terrace is on the lower end when compared to other suburbs in Seattle–making it more affordable.

Everett is a suburb known for its culture, night scene, family-oriented festivals, and small town vibes. It’s a beautiful community to call home and has plenty of outdoor places to explore. There are so many kid-friendly and family-friendly parks–the most popular ones include Evergreen Arboretum & Gardens, Narbeck Wetland Sanctuary, Legion Memorial Park, Spencer Island Park, Forest Park, and Grand Avenue Park.

With the median home sale price being less than $600,000, Everett is a cheaper area to invest in real estate.

Renton, WA | Cheaper Cost Of Living & The Manufacturing Center For The Pacific Northwest

In addition to being the manufacturing hub for the Pacific Northwest and being home to Boeing Commercial Airplanes, Renton is a big fishing community and has plenty of great restaurants. Make sure to check out these fantastic restaurants: The Melrose Grill, Jimmy Mac’s Roadhouse, Marianna Ristorante, Sansonina Ristorante Italiano, and Whistle Stop Ale House.

Renton, WA, is an affordable suburb in Seattle, especially with it being a manufacturing hub and home to large corporations.

As a waterfront suburb, Shoreline is a one-of-a-kind area to call home. A few of Shoreline’s landmarks include the William E Boeing House and the Crawford Store. While these landmarks are essential to the community, some other popular places include Shoreline Stadium, Shoreline Historical Museum, Hamlin Park, Richmond Beach Saltwater Park, and Kruckeberg Botanic Garden.

If you want a waterfront suburb at an affordable price, then Shoreline is the place for you!

For more attractions, restaurants, things to do, and suburbs, check out our map!

Are you ready to move to a Seattle Suburb? All Ready Moving is here to help! With 18+ years of experience, our crew members are hardworking, dedicated, professional, and trustworthy. Call us today at (360) 507-2447 for a free estimate!