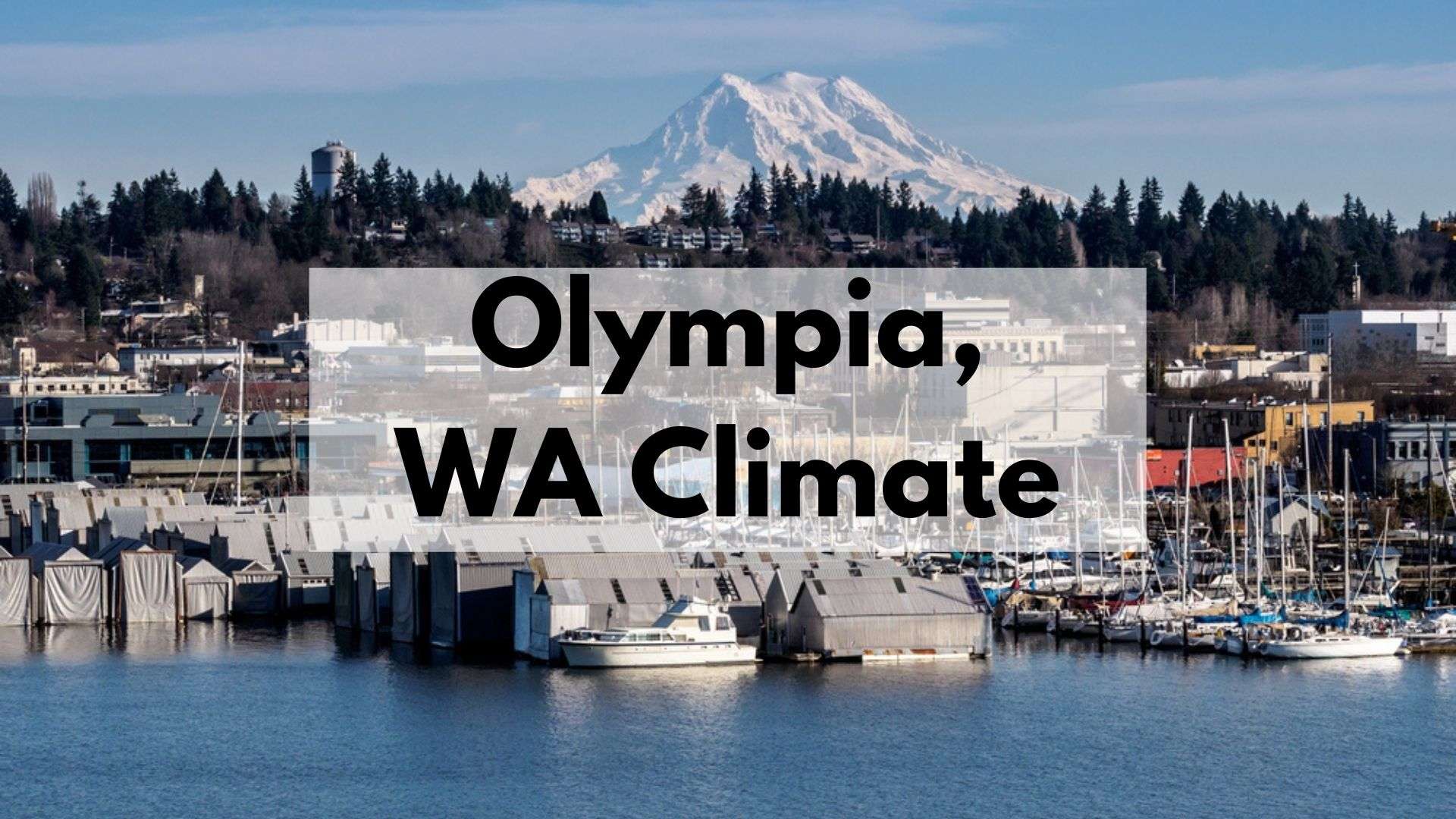 Sixty miles southwest of Seattle, on the southern end of the Puget Sound, sits Washington’s capital city of Olympia. Named after the Olympic Mountains that can be seen to the northwest of the city, Olympia is home to about 50,836 people. Overall, the weather in western Washington is largely affected by the cold, moist weather systems near the Aleutian Islands in Alaska. The area surrounding Olympia is categorized as having a warm-summer Mediterranean climate, but Olympia itself has a specific microclimate that consists of wet winters and cooler, dry summers.

People often think that an area’s climate and weather are the same things. Though the two are connected, they’re very different. Weather is the day-to-day conditions of an area, while climate is the average weather conditions over a longer period of time. So when you’re considering a move to a new area, it’s important to look at both. Overall, Olympia’s climate is pleasant.

Olympia has a reputation for being cloudy and rainy, but there are plenty of opportunities to enjoy beautiful weather! The city offers four distinct seasons and milder temperatures throughout the year. Here’s a look at what to expect during each season in Olympia:

Winters in Olympia are overcast, wet, and cold. Daily high temperatures during Olympia’s winters rarely go above 51°F. You can expect very little sunshine in December and January – Olympia only receives about 2 hours of sunshine a day during these months. Olympia receives about 10.8” of snow across 6.3 days during the winter. The majority of the rainfall Olympia receives occurs during the winter too, and the city’s streets and creeks may experience some flooding. Winter is also the most humid time of year in Olympia, with an average relative humidity of 89.1%.

The wetter season in Olympia continues into spring but tapers off significantly from an average of 5.3” of rain in March to 3.5” in April. The wet season officially ends on April 29. Humidity lessens in the spring, dropping to around 72.9% in May.

Summers in Olympia are dry, with average temperatures topping 77.7°F in August. Though skies are generally clearer during the summer, temperatures rarely go above 80°F from June through early September. Summers are the least humid time of year in Olympia, the lowest being in July (70.8% relative humidity). Even though the temperatures are not exceptionally high, the UV index reaches up to 7 from June through August, so precaution should be taken if you’re planning on being in the sun during these months. 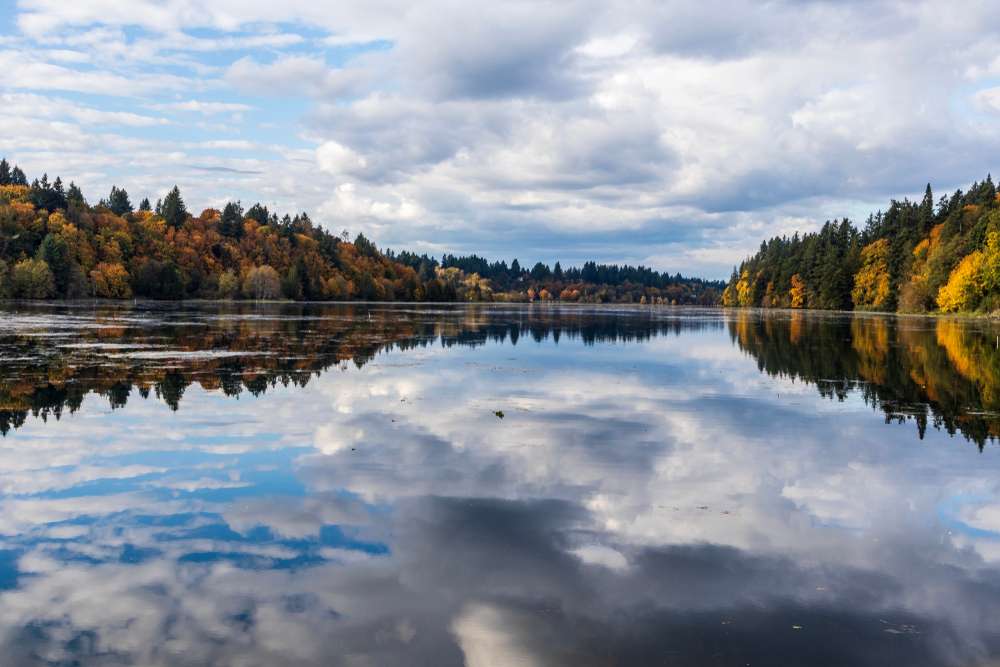 Autumn starts out cool in Olympia, with average September highs of 71.8°F. By the time November rolls around, average high temperatures drop to 50.2°F. Olympia’s wetter season starts up again in October, when the area experiences 14.2 rainy days. In November, there are about 20 rainy days, and you may even see some snow! The year ends with December being the coldest, most humid month of the year. Temperatures top out around 44.2°F, and humidity reaches 89.1%.

The weather in Olympia can change a lot from one month to the next! Wondering what the monthly temperatures in Olympia are like? Here’s what you can expect:

With average highs of 45.9°F and average lows of 33.6°F, January is one of the coldest months in Olympia. Don’t expect much sunshine – Olympia only receives about 2 hours of sun in January.

The weather stays chilly in February, with average highs of 49.3°F and average lows of 32.7°F. Though February is the snowiest month in Olympia (the city receives 4.7” on average), the snowy season ends in mid-February.

The weather stays about the same in March, with an average high of 54°F and evening low of a cool 35.1°F. There is about a 50% chance of rain throughout the month of March.

Temperatures rise a bit in April in Olympia. High temperatures average out at 58.8°F and drop to about 37.8°F. April 29 is the end of the wetter season in Olympia. 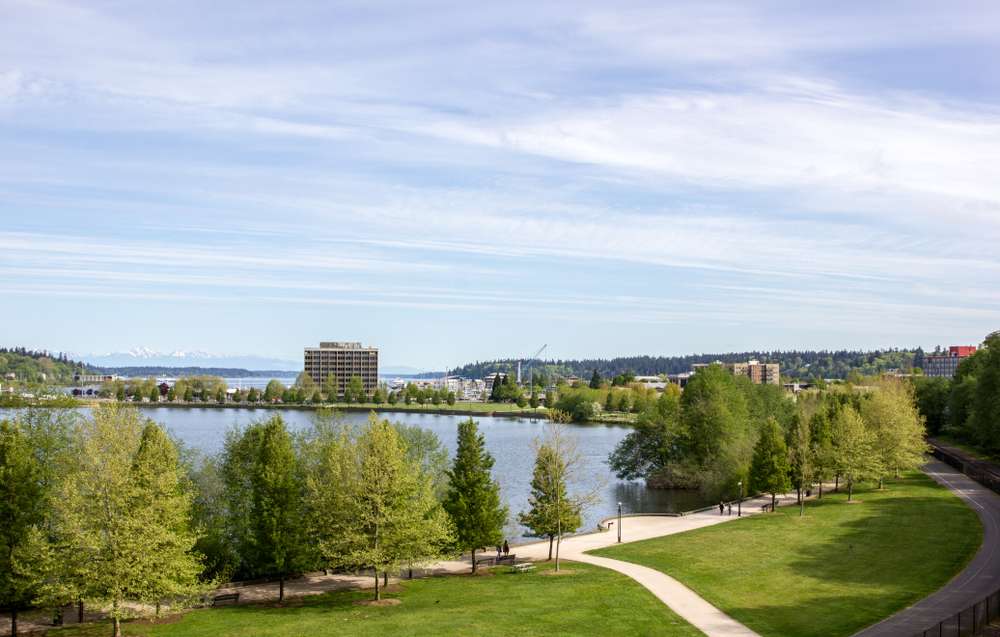 May is relatively enjoyable in Olympia. Temperatures rise to 63.5°F highs and 43.2°F lows. The chance of rain in Olympia in May falls below 30%.

June is a very pleasant month for weather in Olympia! Temperatures range from 47.7°F to 70.5°F. Olympia enjoys its longest days in June, with about 15.8 hours of daylight. Olympia’s UV index is at its highest beginning in June, with an average maximum UV index of 7.

July sees a rise in temperatures in Olympia, with average highs of 76.8°F and lows of 50.7°F. July is Olympia’s driest, least humid month, with an average relative humidity of 70.8%. It’s also the month with the most overall sunshine – Olympia receives an average of 10 hours of sunshine per day in July.

August is the hottest month of the year in Olympia, with average highs of 77.7°F and average lows of 50.5°F. The chance of rain is very low in August.

Though September brings the end of summer, it’s still a very pleasant month in Olympia. Temperatures drop to 46°F, but the average daily high is an enjoyable 71.8°F. September 15 is the end of the warmer season in Olympia.

Temperatures continue to cool in October in Olympia. The highs average 60.3°F and lows fall to around 40.5°F. October sees the start of the wet season in Olympia.

Grab an umbrella if you’ll be in Olympia in November! The city’s rainiest month sees 20.1 days of rain that accumulates to 8.6” of precipitation. Temperatures top out at an average of 50.2°F and cool off to about 36.3°F.

December is Olympia’s coldest month when highs reach only 44.2°F and lows average 32.5°F. Olympia experiences the least amount of sunshine during December too – only about 2 hours a day. It’s also the most humid month in Olympia, with an average relative humidity of 89.1%.

If you’re relocating to Olympia, you don’t have to worry about much hazardous weather. However, the rivers and creeks can overflow during the wetter season, causing flooding in the city’s streets. If it’s necessary for you to drive during these conditions, it’s important to stay alert to avoid getting stuck or hydroplaning.

Though earthquakes are more common in Washington state than the national average, Olympia itself is no more susceptible to them than the rest of the country.

Planning a trip to Olympia? The best time to visit Olympia is July through August, most notably the last week of July. During these weeks, high temperatures stay around 77°F, and average lows are about 50.5°F. These temperatures are perfect for enjoying all the parks and green spaces Olympia has to offer!

Does Olympia’s mild climate sound ideal to you? If you’re planning a move to Olympia, make sure you’re working with the best professional Olympia moving company, All Ready Moving. Our trustworthy, expert team of movers is ready to help get you relocated! Call us today for your free quote!