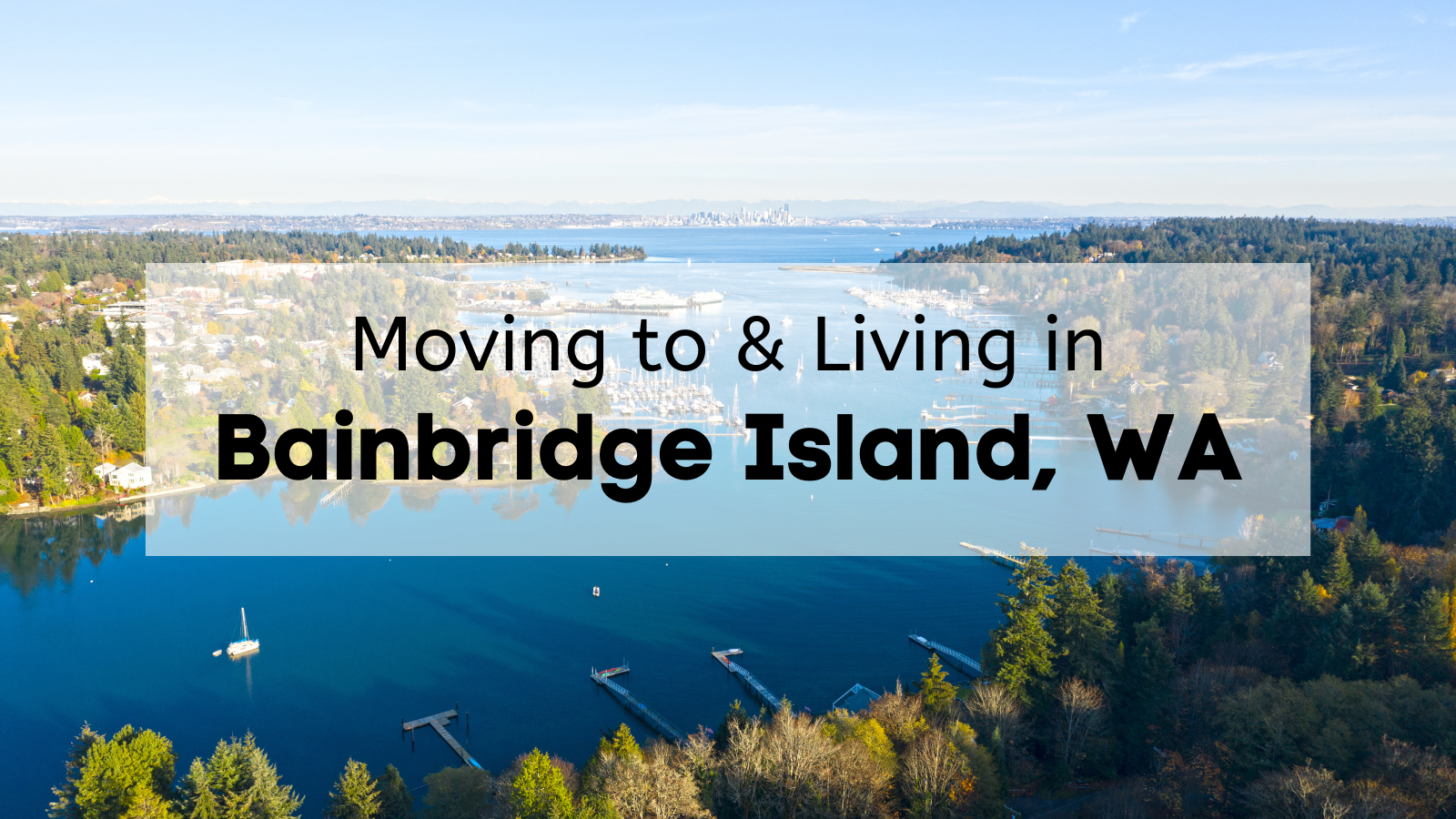 Bainbridge Island is both an island and a city within Kitsap County, WA, so don’t get it confused with Bainbridge Island in Alaska. It’s the second largest city within the county, and many of the residents are ancestors of the Suquamish people. There are nine villages on the island, and they include: Port Madison, Battle Point, Point White, Port Blakely, Lynwood Center, and Eagle Harbor.

In 1841, Bainbridge Island was named after Commodore William Bainbridge, a commander on the USS Constitution during the War of 1812.

Bainbridge Island, WA, is known for its beautiful views and historical heritage. In addition to it being a stunning place to call home, it’s ranked one of the best places to live in Washington.

Where Is Bainbridge Island?

Bainbridge Island is in the Puget Sound basin, east of the Kitsap Peninsula and west of Seattle. The island was formed during the ice age 13,000-15,000 years ago. It occurred after a 3,000-foot glacier scraped out the outline of the Puget Sound and Hood Canal basin.

The closest big city is Seattle, and the most common way of getting there is by ferry, but you can also fly. It is roughly 10 miles from Bainbridge Island to Seattle, WA. Some of the other cities that are near Bainbridge Island include: Bremerton, Shoreline, Edmonds, Lake Forest Park, and White Center.

There is public transportation available through the Kitsap Transit, along with taxis.

Two of the most notable people that has lived in Bainbridge Island include:

Dove Cameron: Best known for her role in Liv and Maddie and the well known Disney movie, the Descendants, Dove is well-known in households across the world.

Russell David Johnson: Is best known for his role as the professor in Gilligan’s Island.

The total crime rate is 941 per 100k people, which is 62% lower than the national average–making this island a very safe place to call home.

Cost of Living in Bainbridge Island

The cost of living in Bainbridge Island is expensive, with a COLI 83.3% higher than the national average.

The Economic Policy Institute recommends that a family of four have a household income of $93,879 to live comfortably. Click here to check out the calculator.

If you’re looking to purchase a house, the median home price in Bainbridge Island, WA, is $1,311,500. Being surrounded by nature, beautiful waterfront views, modern homes along with historical properties, Bainbridge Island has something for everyone. Check out some of the available homes for sale on Bainbridge Island.

Purchasing a home isn’t for everyone. If you’re not interested in buying a piece of property, there are plenty of places you can rent on the island. The average rent in Bainbridge Island is between $2,100 and $2,950+. The price is dependent upon the size and location.

The top-rated and safest neighborhoods to consider moving to in Bainbridge Island.

With plenty of areas to explore and beautiful waterfront views, Fort Ward is known for being a family-friendly neighborhood to call home.

You will find a mixture of older homes that have plenty of charm, along with new custom builds–whether you want a modern or traditional look, there is something for everyone.

Bainbridge Island has an average rainfall per year of 40.01 inches, and then they have an average of 2.7 inches of snow per year.

The most common natural disasters in Washington include wildfires, earthquakes, and landslides.

Things to Do in Bainbridge Island

With 150-acre, there are plenty of beautiful areas to explore. Bloedel Reserve is on a mission to create a tranquil landscape.

Bainbridge Island Historical Museum is a place where you can learn and celebrate the diverse community of Washington.

As a go-to place for early childhood development where kids can experience playful learning that helps kids to expand their knowledge, KiDiMu is a great family-friendly activity.

There are plenty of parks in Bainbridge Island that are family-friendly and fun to explore. If you’re interested in different community events, click here for Bainbridge Island’s event calendar.

Food is everything. Here are some of the top-rated food options in Bainbridge Island, WA.

With a careful balance of ingredients, Mora Ice Cream is an elegant place to get one-of-a-kind delicious flavors.

Only made with high-quality ingredients and handmade food, the dishes being served at Via Rosa 11 was inspired by the childhood of the founder, Pino Sordello.

If you plan on relocating without a job, there are 3,300+ jobs available on Indeed within a 25-mile radius. If you’re hoping to work for the government, here are some of the City of Bainbridge Island jobs.

If you’re interested in checking out some books, you can find everything you need at the Bainbridge Public Library.

To help you find more amenities, attractions, restaurants, and fun things to do in Bainbridge Island, WA, check out this map!

Are you considering moving to Bainbridge Island, WA? All Ready Moving is highly-rated, trustworthy, affordable, and professional, with the best Bainbridge Island movers. Call us today at (360) 507-2447 for a free quote!