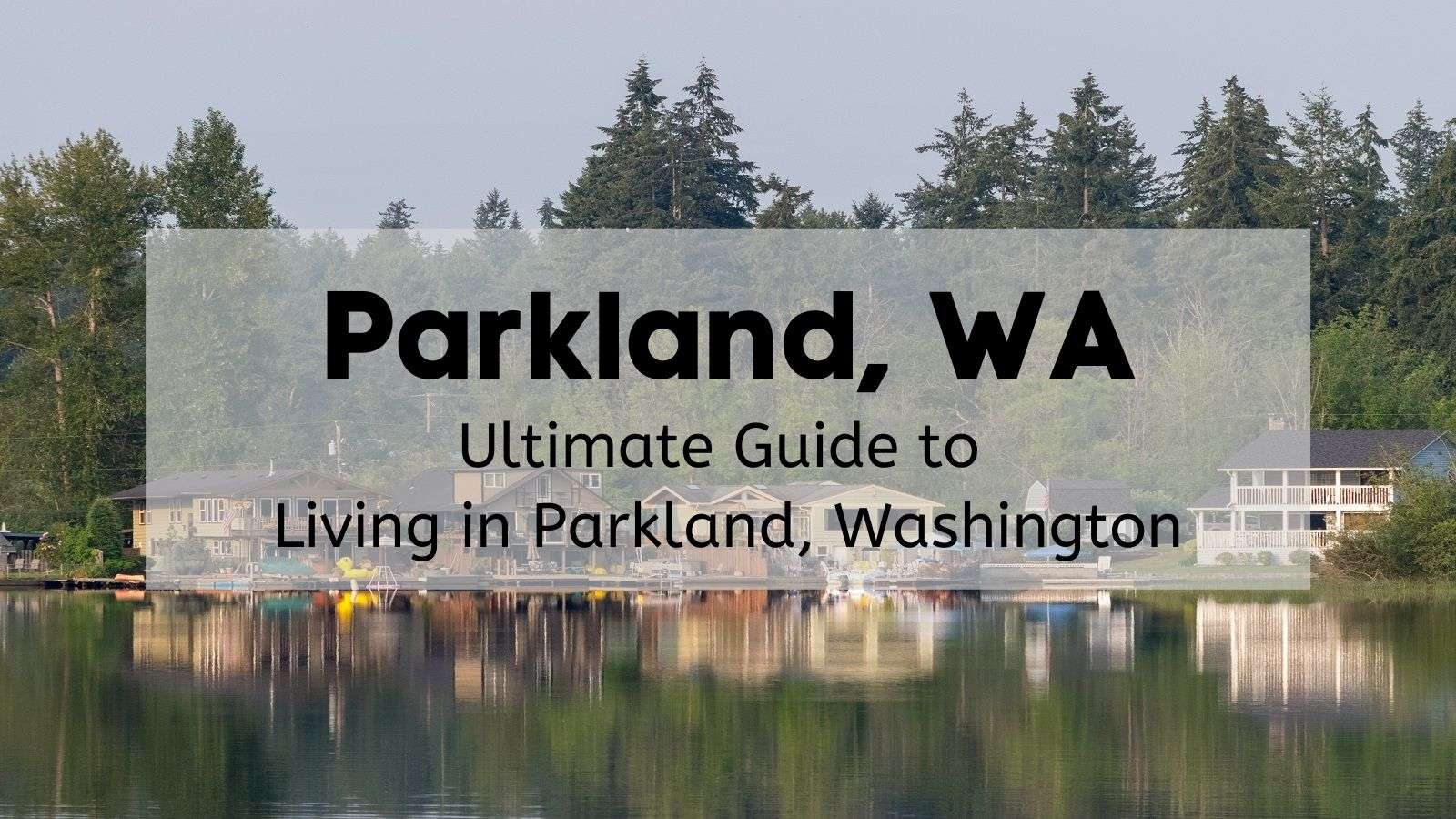 Moving to Tacoma or relocating within the metro area? If you’re looking for a safe place to live close to base, Parkland, WA should be on your list! This unincorporated community has a Tacoma mailing address and offers a great quality of life with low crime, good schools, and affordable home prices.

Parkland, Washington is known for Pacific Lutheran University (PLU), a private university ranked #14 among regional universities in the West and #5 nationwide among Best Colleges for Veterans.

It was one of the first areas settled in Pierce County and remained a largely rural area for decades after Midwest Norwegian-Americans founded PLU in 1890, but it grew dramatically as the military base’s population increased. Today, it’s one of the best Tacoma suburbs for families, military members, and students!

If you follow the UFC, Demitrus Johnson aka Mighty Mouse is from here.

Here’s what you can look forward to after moving to Parkland, WA.

Where is Parkland, WA? This Tacoma suburb is part of the Parkland – Spanaway – Midland (PSM) Communities Plan in west-central Pierce County. The Parkland community borders Tacoma and the Midway, WA community to the north, Spanaway, Washington to the south, Brookdale to the east, and Joint Base Lewis-McChord to the west.

These three Parkland communities are distinct districts but very interconnected with newer residential neighborhoods and an historic urban core. Together, Parkland, Spanaway, and Midland have a population of 79,000.

Is Parkland, WA safe? The violent crime rate is 11% above the national average but it’s far safer than Tacoma which has 117% more violent crime than the U.S. average! While living in Parkland, you will be served by the Pierce County Sheriff’s Department and the Parkland-Spanaway Detachment.

Cost of Living in Parkland, Washington

After moving to Parkland, you can expect the cost of groceries to be close to average while health care and utilities are very affordable. Washington state utilities are 26% cheaper than the national average but they’re even more affordable in this community! Housing is the biggest factor pushing the Parkland, WA cost of living over the US average.

The median home price in Parkland, WA is $427,500. The real estate market in the community is very hot with homes selling after 11 median days on market with 73% of homes selling over asking price.

Best Places to Live in Parkland

Ready to explore subdivisions and the Parkland housing market? You’ll find many older ranch homes in the neighborhood built in the 1950s and 1960s. There are also two-story homes built in the 1970s to 1990s. If you’re interested in a newer home, you’ll find custom resale homes for sale in Parkland, WA as well.

There are a limited number of new home communities in Parkland which tend to be small. The Tallentire development from Sager Family Homes is close to JBLM and I-5 with new 3-bedroom homes starting at $365,000. Tree Run is located south of PLU and close to Spanaway Lake. This prestigious Parkland, WA neighborhood offers 3- and 4-bedroom luxury homes starting in the $900s.

Planning to rent after moving to Parkland, Washington? You’ll find a huge assortment of apartments in Parkland, WA around PLU and along Pacific Avenue. There is a high concentration of apartments in the neighborhood thanks to demand from the military community and PLU students. Garfield Station Apartments is one of the most popular apartment buildings within walking distance of Pacific Lutheran University with rent ranging from $1,050 to $1,800. Aravia Apartments is popular with families with a pool and spa, clubhouse, dog park, and nearby green spaces.

What’s the weather like in Parkland? The community has a warm-summer Mediterranean climate with warm, temperate weather. After moving to Parkland, Tacoma, you’ll enjoy dry, warm, and short summers with cold, wet winters. The temperature usually ranges from 37 degrees to 78 degrees throughout the year, rarely exceeding 88 degrees or dropping below 27 degrees.

Make sure you pack an umbrella because you’ll get about 41” of annual rainfall, most of it during the winter between November and February. You’ll get just 4” of annual snowfall. The weather is often overcast with only 141 average sunny days per year.

The best time to visit the Tacoma Parkland community is July to September for warm, dry weather.

Fun Things to Do in Parkland

With its suburban, wooded setting minutes from downtown, large college student population, and nearby military base, Parkland offers a unique assortment of attractions and activities that appeal to so many people. Nature enthusiasts love the parks in Parkland, including the large regional Spanaway Park, for fishing, boating, golfing, swimming, picnicking, and its holiday lights drive-through. There’s also plenty of convenient and fun shopping in Parkland including the highly rated Marvel Food & Deli, Park Plaza Shopping Center, The Gallery Parkland cannabis store, and Comiks The Gathering comic book store.

Here are the top Parkland, WA things to do.

The Parkland, WA petting zoo is open year-round with outdoor and indoor animal experiences. The petting zoo houses everything from capybaras and otters to camels, goats, armadillos, and alpaca.

One of the best rec centers in Tacoma, Sprinkler Rec Center is packed with indoor and outdoor programs and activities including ice skating, hockey, ice bumper cars, tennis, soccer, and skateboarding. The facility has an NHL regulation ice rink, one of the region’s largest skate parks, Spire Rock climber’s rock, a playground, trails with access to Bresemann Forest, and dozens of game courts.

By day, this family-friendly entertainment center offers food, an arcade and league bowling with no reservations open play. It’s also a top destination for nightlife in Parkland, WA with a nightclub and bar.

Other attractions in Parkland, WA:

You’ll find dozens of top-rated Parkland restaurants mostly along Pacific Avenue and PLU. Here are some of the best places to eat in Parkland, WA!

There are more than 1,200 businesses or employers in the Parkland-Spanaway-Midland community, but only 1% have at least 100 employees. Most businesses in the actual community are small businesses. Most people living in Parkland work on base or commute to Tacoma or Puyallup.

The drive from Parkland, WA to Tacoma, WA is 10 miles. Puyallup is less than 10 minutes away and home to the fabrication division for Boeing, several distribution centers, and Multicare/Good Samaritan Hospital.

Here’s an overview of commercial areas and major employers in Parkland:

You can explore jobs in Parkland, WA on Indeed to see nearby job opportunities. According to Payscale, the average salary is $67,000 or $20.61 in Tacoma, including closely tied unincorporated communities like Parkland.

While living in Parkland, Tacoma, you’ll be served by the Franklin Pierce School District which has eight elementary schools, two middle schools, two high schools, and alternative programs like GATES High School. Depending on where you live, your kids may attend one of several schools in the Parkland WA school district. Most Parkland students attend Washington High School but some areas are in the boundaries for Franklin Pierce High School.

You can click here for the interactive Franklin Pierce School District map with proposed boundary recommendations or the official FPSchools map here.

Considering private school? The community is home to Parkland Lutheran School which was originally pat of the Parkland Lutheran Academy founded in 1894. The academy split into the elementary school portion and Pacific Lutheran University (PLU), the community’s most well-known facility for higher education. PLU has about 3,000 enrolled students on its 156-acre campus.

Tips for Moving to Parkland, WA

Does living in Parkland sound right for your family? Give us a call at All Ready Moving & Storage for a free moving estimate from our 5-star Parkland movers!